Don’t include a snowglobe in your carry-on luggage at the airport.

A mother of two young children learned the hard way at Philadelphia International Airport that such a deliberate act is unacceptable. At the security check, she went into a nasty tirade directed at the Transportation Security Administration agent.

“Are you personally going to give me the $40?” she asked.

On the other side of me, a man in his late 20s was sitting in a chair facing two TSA agents. He was shaking, too obviously nervous.

“I swear. I just. I. I don’t know how that got in there,” he kept telling them. I never found out what “that” was, because I thought my attempt at trying to overhear any more of the conversation might be perceived as a threat.

Airport security is supposed to make us feel better. But sometimes, it appears to have the opposite effect. This is not because of the work of the TSA agents, but rather the, dare I say, outdated security policies.

END_OF_DOCUMENT_TOKEN_TO_BE_REPLACED 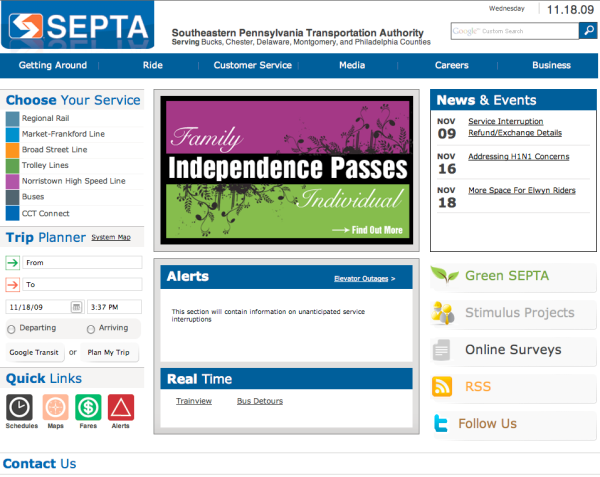 SEPTA, the sixth-largest public transportation agency in the country, has launched a sleeker, new Web site.

Schedule information is much more accessible (though, as of today, there are still bugs to be worked out — Regional Rail and trolley schedules are MIA), and important links for riders — including customer service comments — are conveniently posted on the home page.

Next on the agenda, from a rider’s perspective, should be a new “Plan My Trip” feature. The old one is still in tact, but SEPTA also gives the option of Google Transit. But an in-house feature would be much easier to use. I gave up on Google Transit almost immediately.

Error: Twitter did not respond. Please wait a few minutes and refresh this page.