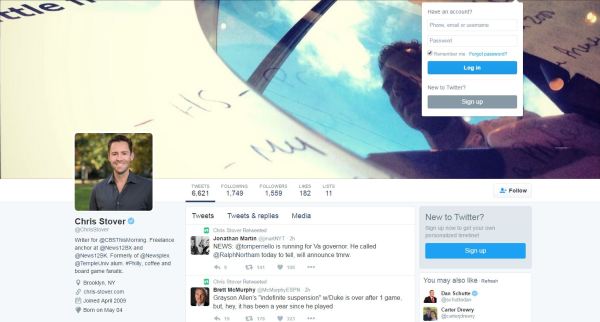 Last year, I made a New Year’s resolution to blog more.

My 2017 resolution (for online purposes, at least) is not only to up my blog posts, but my overall use of social media. Not in the I-have-no-life-and-I-need-instant-gratification kind of way. But the look-at-the-power-of-social-media kind of way.

Historically, Twitter was the social network I liked the least. As with many new social media fads, I was reluctant to join (see: Snapchat, WhatsApp, Pinterest, etc.). But as a journalist in college trying to push my newspaper into the new media world, I caved and got my Twitter account in April 2009, a month before I received my college diploma.

(My buddy Dave Isaac deserves full credit for my first Twitter handle, @theREALcbs. Yes, CBS is both my employer and my initials.)

Now, admittedly, my tweets are fewer and farther between. But my followers (I hate that word, in this context) are in for a new @ChrisStover.

Why the sudden change?

I began noticing a sudden and rapid influx of new followers (again, awful word). I investigated, clicked on my Twitter profile and saw the little blue check mark.

That is the exact motivation to post tweets and media that are worthwhile for a larger audience. To share what I’m working on, what colleagues are creating, what I think is interesting and worthy of a passing glance or an in-depth finger tap. But I will also post about Food Network, cupcakes, cute puppies and what’s wrong with NYC public transit.

(Answer: A lot is wrong with NYC public transit.)

Because in addition to being informative, engaging and purposeful, social media should still be social.