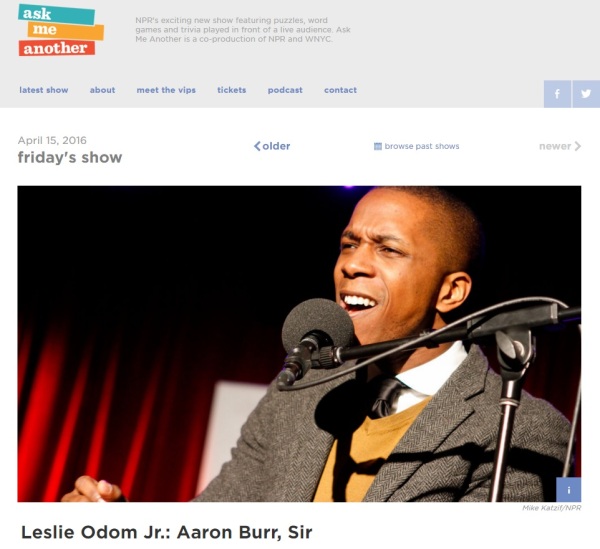 Earlier this year, I wrote about that one time I was a game show contestant.

Now, I have the proof.

The episode of the radio show/podcast Ask Me Another featuring yours truly has finally been published. It was recorded in February.

You can listen and/or download it here (or wherever you may get your podcasts).

And though I’m not one for spoilers, I’m about to give one. I didn’t win. Otherwise, I would’ve been bragging about it since February. And here’s why.

The game I lost, which I described in the above blog post, was “This, That or the Other.” Unless you’re an American revolution historian, a rap aficionado or a 1980s movie geek, you’d also lose. Unless you were put up against a buzzer-happy contestant like me. Then you’d win.

I think it’s a pretty entertaining bit. My competitor and I are both admittedly clueless regarding the categories. But we shined with our humor.

My interview portion before the game began was cut for time. I discussed how I once stumbled upon a pizza speakeasy in New York City’s East Village that was tucked away through a door in a construction site. Clearly, it’s hard to see why it was cut, but I understand. If you need more details about where to indulge in secret pizza, you know where to contact me.

But, cutting to the chase, I lost. Which was unfortunate, because the winner of each game moves on to the final round. The winner of the final round wins a prize — a Rubik’s cube, and another something from that episode’s featured guest.

The featured guest in my episode was Leslie Odom Jr., known for his role Aaron Burr in the impossible-to-get-tickets-to-unless-you-want-to-spend-$400-or-wait-two-years Broadway show Hamilton.

His prize that night was two standing-room tickets to see the show.

Meaning I could’ve won free tickets. To Hamilton. Where I would’ve had to stand. And witness genius.

And play with a Rubik’s cube during intermission.

Ask Me Another is such a fun show, so I hope you give the full episode a listen. Last week’s episode with Titus Burgess was also hilarious. These are good places to start.

2 thoughts on “How I Lost My Chance to See ‘Hamilton’”