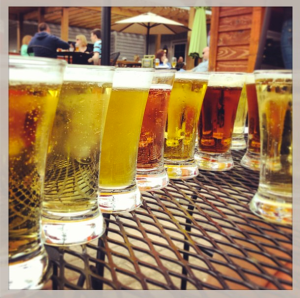 I’ve been in Central Virginia for four-and-a-half years. In that time, I’ve done as much as I could in the area while still not doing enough. From tubing on the James to Fridays after Five to skiing at Wintergreen, it’s difficult to be bored in the Piedmont.

So here is my list of things I’ll miss so much about this region that New York just won’t be able to offer.

OK, so I’ve developed a pretty good taste for wine – even red wine – in my time here thanks to the countless vineyards and wineries (hat tip to Blenheim, Veritas, Pollak and King Family). But I’ve developed a great taste for beer.

Central Virginia loves its beer, and I love Central Virginia. Therefore, I love beer. They don’t call it the “Brew Ridge” for nothing. Starting at Devils Backbone and its Vienna Lager you can find throughout the region and beyond. Or how about Wild Wolf’s Blonde Hunny? Try anything from Blue Mountain Brewery (so long as it’s not too hoppy) or Starr Hill (Jomo and Love). My soft spot will always be for South Street Brewery – the Liberation, the Imperial Stout and, of course, the Satan’s Pony. Or match those with our local Bold Rock cider for a great Snake Bite. You can do no wrong wherever you go.

(Side note: I wrote this before South Street closed. I know it will live on in some form, but this moment is bittersweet.)

It’s been said that Charlottesville has more restaurants per capita than New York City. So I guess that means I’ll be out of luck in finding quality eateries. (Kidding.) But since Charlottesville’s are all in such close quarters, anything I needed to satisfy my appetite was within 10 minutes of my apartment.

The mussels from The Shebeen are the best I’ve had. The lamb shank from The Local makes my mouth water thinking about it. A burger from Boylan Heights or Citizens Burger Bar? Done. The pimento cheeseburger on a pretzel bun from Rapture? Any time. Even if it’s something “simple” like a hoagie from The Market (the Jefferson or the Crozet, please) or the biscuits and gravy from La Taza, I’m content.

One Charlottesville eatery stands out on its own, even outside of the “restaurants” category. I’ve tried nearly every combination possible at Bodo’s Bagels, but my go-to option is the sausage, egg and American cheese on a garlic bagel.

There was one time when many people at the Newsplex had a sandwich named after them. One of my favorites was the Tara – cucumber, avocado, sprouts, feta spread and lettuce on a plain bagel (or some variation thereof). Vegetarian never tasted so good.

It will always be near my heart, mostly because I bought myself a Bodo’s T-shirt as a souvenir. If anyone wants to ship me some jalapeno line cream cheese, I’d greatly appreciate it.

My music knowledge when I moved to Charlottesville was like my motivation to run – nonexistent. Both changed quickly. One major reason for the former is 106.1 The Corner.

Turns out, different is good. Sure, I rediscovered country music when I moved below the Mason-Dixon line. But the Corner is the station that most identifies with me. They play all the songs you want to hear before they’re popular and from artists you care about (i.e. not Kesha), and once they become popular, you’re the cool kid who goes, “What? You’ve never heard this before?”

Obviously, most of my list is food- and drink-focused. For good reason. Charlottesville has made me a coffee addict. Legit addict. Like… can’t function without caffeine.

Sure, I love Millie Joe, C’ville Coffee and Mudhouse. Café Cubano has a great café con leche, and La Taza can do a latte right. But even my go-to for fast and cheap on the go, Starbucks has a great flare in town, and it’s the people who make it. My baristas (yes, I consider them my personal companions) know my order (venti breve iced coffee with light ice in the summer or venti dark roast with vanilla in the winter), and the environment is perfect to sit and sip. I think there may be a few in New York.

I never ran before I moved to Charlottesville. When I moved here, I found out everybody does. So I jumped on the train. Bought myself some running shoes from Ragged Mountain Running Shop. And I hit the trails.

My favorite is the Monticello Trail, a grueling two-mile trail from the base of Route 20 that heads up a mountain to Thomas Jefferson’s Monticello. The two miles up the mountain are torture, and the part that gets you to the top is knowing it’ll be so much easier on the way down. I conquered this trail at the peak of my running days. Perfect for the summer because of all the shade from the trees. Beautiful in the fall when the colors begin to change. The Monticello Trail gives a great all-around taste of the nature just begging to be explored in Central Virginia.

But what I know I will miss more than and of the material things are the people I’ve met. First, I’ve worked with a number of amazing colleagues, many of whom I’ve seen leave Charlottesville for bigger things. I’ve learned something from all of my Newsplex coworkers, and we will forever have a bond that is unshakeable. But it’s also the sources I’ve met, the friends I’ve made and the community members I’ve engaged with over the past four-and-a-half years, as well. Those relationships will be the toughest thing to leave behind, but I know they will also carry on.

So long as they bring me Bodo’s.